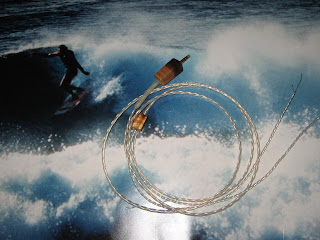 Originally I never made a headphone cable, we (Ted and I) only did IEM cables because it was what we were good at, it had a very low failure rate, and we could make them look relatively good and/or better than the other people overseas with 2-3 week lead times to the US.
Until I ran into Sawyer60, I never really thought of doing a DIY Grado kit. From the looks of it, he hadn't touched a soldering iron before and look at him go! He basically just got an IEM cable minus connectors + some wood bits and look how it turned out! 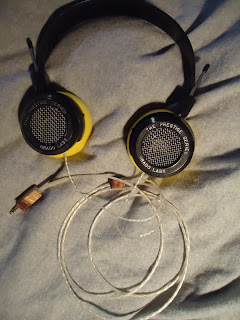 Lookin' great buddy and I totally dig the grill mod. Very SR-225i-esque He wanted a square wood plug cover too which was new to me at the time but I think it looks totally cool lol. He's had the cable for a few months and it would appear he's more than pleased with the outcome! 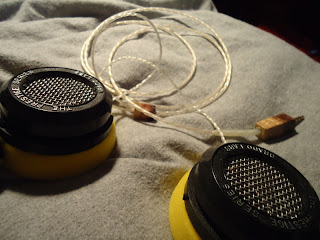 "I'm going to blame you for my smile wrinkles two weeks from now! Took me 45 minutes to disassemble everything, I chose to use the hairdryer rather than the steam method (seems safer) and the sautering took about 15 to carefully do it. To reassemble I just put the two cups together, applied the heat from the hair dryer and SMOOSH, good as new! The best part from all this was when I put the headphones on themselves and listened to some of my music and immediately I noticed the difference in sound and complexity, I'm so tremendously thankful and in debt to you! Thanks for everything!" -Sawyer60

Looks like the Grado and cable pair seems worth the effort!
Posted by Chris_Himself at 7:30 PM